A Brazilian
tree asks
for asylum.

By courtesy of
Ueslei Marcelino/REUTERS

If deforestation continues, in 15 years the Amazon will no longer be the Amazon. A part of it will turn forever into a degraded savanna.

Help pressure
the authorities
to ban deforestation
in the Amazon for
at least 5 years. 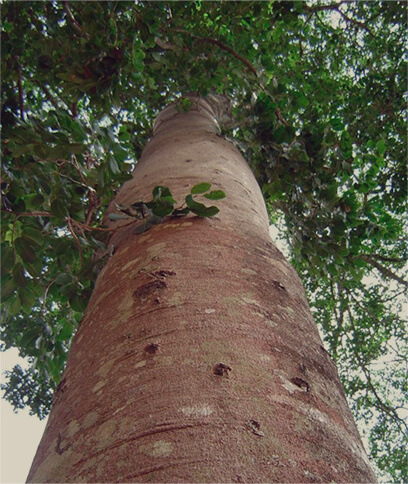 Hymenaea courbaril, the Jatobá is a tree native to Brazil. It can reach a height of around 40 meters and a diameter of 2 meters. It is considered sacred by the Indigenous people and is fundamental to the evolution and survival of animals and even to other trees.
Previously found in abundance throughout the Amazon, the Jatobá is now under double threat of extinction. As well as suffering at the hand of mega-exploitation of wood for many years, its specimens which were in protected areas also suffered from constant deforestation and fires.

The Amazon is home to:
1 in 10 known animal species.
75% of unique species of flora found globally.
More than 3,000 species of fish – the highest number of species of freshwater fish.

of the Amazon
no longer exists.

The area used for soy bean cultivation in the Amazon has quadrupled to 4.66 million hectares over the last few years.

FIVE EMERGENCY MEASURES TO FIGHT THE DEFORESTATION CRISIS IN THE AMAZON

Amazon Forest destruction reached 10,129 km² between August 2018 and July 2019, an increase of 34% over the previous period. In 2020, official data point to a new high, at a similar level. This scenario is accompanied by an increase in violence, forest fires, the expansion of irregular mining, the growth of public land grabbing and other illegal activities, especially invasions of indigenous lands and protected areas.

Among the reasons for this situation is the irresponsible stance adopted by the President of Brazil, who has embraced a perverse and overtly anti-environmental and anti-indigenous agenda, attacking the Constitution itself. As a consequence, investors and international companies threaten to withdraw their business from Brazil, which would intensify the current economic crisis and threaten jobs, aggravating the country's inequality and poverty.

In the past, Brazil was able to reduce the rate of deforestation in the Amazon and, at the same time, promote an increase in agricultural production and exports, generating jobs and economic growth. The current government, however, does not appear to have any interest or capability to follow this path. Its actions are based on fallacious measures and advertising campaigns that try to mask the reality of the facts. Not even sending military forces to the Amazon has generated effective results.

The solution to the current crisis will not come from the adoption of theatrical measures. The organizations that subscribe this letter understand that rigorous actions are needed to face such acute crisis. Below are five emergency lines of action that we believe should be implemented as soon as possible*:

1. Moratorium on deforestation in the Amazon.

3. Immediate resumption of PPCDAm - Action Plan for Prevention and Control of Deforestation in the Legal Amazon

4. Demarcation of indigenous and quilombola lands and creation, regularization and protection of Conservation Units.

5. Restructuring of Ibama, ICMBio and Funai.

* These emergency measures must be implemented without prejudice to structural policies, such as programs and projects aimed at the achievement of sustainable development, the resumption of the activities of the Amazon Fund and of the Climate Fund, pacts with the productive sector and the reinforcement of green investments, most of which are already included in the PPCDAm itself.